A method of restoring earthly balance.

Hello. How do you do? 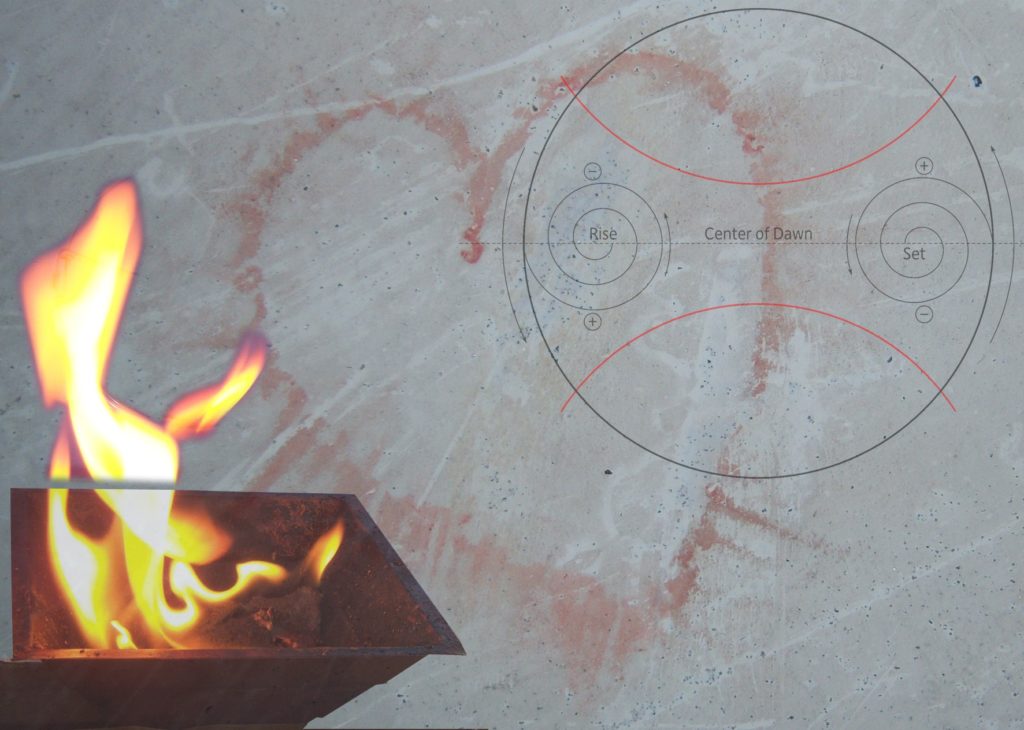 These methods here described could bring extensive regeneration of the environment, people and animals in a short time.

These applications, especially Agnihotra as the basic method elaborated in 1963 by Potdar Saheb and spread until 2008 by Vasant Paranjpé are techniques based on combustion.

They originate from the Vedic Atharvarveda and their effects cannot be valued highly enough if performed accurately and correctly.

First of all: I have no academic background and my words may be seem a bit clumsy under aspects of scientific circumstances of complexity behind my description that I call self-renewal of planets which have a atmosphere.

It is all about the method of combustion while Sunrise and Sunset as described in the Vedic Atharvaveda which seems to be a optimized solution to restore earth wide balance of all nature.

Once in spring of the year 1989, shortly before the fall of the German wall, I met a group of enthusiastic people in a self organized Homa Healing Fire Temple in Berlin Schöneberg who introduced me into this universal solution.

In late summer 2011 I became aware about that the time of access of the application for this solution can run out until approx 2030 before the point of no return for merely the most living conditions on Earth take place. Then things can become very terrible for the whole environment.

I have trust into this knowledge, as also into science and guidance of sharp shaped minds.

Since decades it is clear what will happen to this world if this kind of a industrialized economy is going forward in the way still happens nowadays.

All here is given and shared non commercial in creative commons (CC BY-NC-ND 4.0). You are free to share, copy and redistribute the material in any medium or format by giving appropriate credit (homagui.de).

From my ethical and philosophical insight: Ahimsa is the basic default for the practice and application of these techniques.

Agnihotra is not a Puja!

The solution which was resuscitated in the year 1963 by Potdar Saheb under supervision of Gajanan Rajimwale in Bhopal and Shivapuri, India with the knowledge of the ancient Vedic Atarvaveda which describes ways to recreate the worldwide habitat if a situation occurs as it now is present.

The basic service to be done is called Agnihotra. Officially you will find it under the name Homa Therapy, for example homatherapy.org.

In addition to Agnihotra, it has been shown that where Yajnya is practiced in conjunction with the Mahamrityunjaya Mantra (Triyambakam Mantra), extreme weather conditions subside within minutes. Yes this sounds unbelievable but this is based on own experiences and others who have witnessed.

And, of course, safety must be guaranteed. There are and will be more places on Earth that hardly can not be living space any more. These must be abandoned for the good of the people there.

At least Agnihotra and Yajnya are rituals bases on fire which are practised on many farms as also in hospitals, especially in South America. People became stronger in health or healing faster. They told their people about the fast recovery near by these fires which led more people to come to these hospitals.
But also on plantations or farms plants that were suffering from many diseases because of regular farming were recreated and gave best healthy food after a half year of supplying the ash dissolved in water. As also applied into the soil while planting.

Many reports are available since 2006 via the Homa Health Newsletter and they are really giving good news. I am introducing this here because it is the most comprehensive documentation currently available.

Agnihotra has to be done exactly when the sun is in the middle of horizon of Sunrise or Sunset rooted to your location. The moment can be calculated exactly near to two seconds.

The calculation method for emanating this moment was created by Matthias Fehringer. Many services are available to get those needed timings. 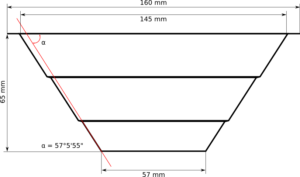 It is a combustion in a pot made out of copper in exact given shapes of an Pyramid. This fire have to be done with organic cow dung and ghee (clearified butter) from species-appropriate cows. 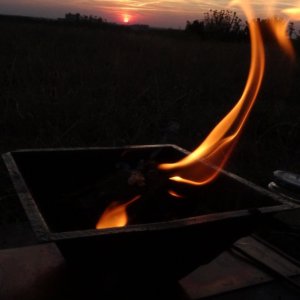 In the calculated moment you have to recite two simple Mantra verses while putting two portions of organic rice that’s germinable into the strong burning fire.

Studies have shown (page 9 on top), that the effect is less if the Mantras are not recited as specified. 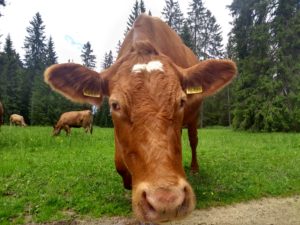 Cows should live their life without slaughter until the end of their natural given life circle. Which is not really possible so I have to be flexible. It would be better to have happy cows.

The same applies to diet which is better without eating meat as also to get rid of this kind of industrialised meat production.

They must have in any case hay and meadow pasture without concentrated feed or medicines, as usually practiced nowadays. This is needed for best results as also to avoid more pollution into the atmosphere.

Cows that live in this atmosphere will blossom just as well as humans and nature in general.

The Yajnya Agnihotra Homa is the perfectly optimized application to restore fertility and natural processes with equally regulating influence on the weather and thus climate.

This will lead to excellent growth and thus stabilise environmental conditions.

For example: Only one Agnihotra causes the decline of pathogenic germs until 98% and its ash reduces algae to the natural level within a short period. Water becomes edible within a very short time without great effort. Reports are available at the bottom of this page.

All the results described above are basically possible within three days up to two weeks until one year of running Agnihotra in agriculture, medical science and as regular service.

This will give not only people prosperity and health that has not been possible for millennia.

It have to be given free of any charge because it is a present for all mankind. 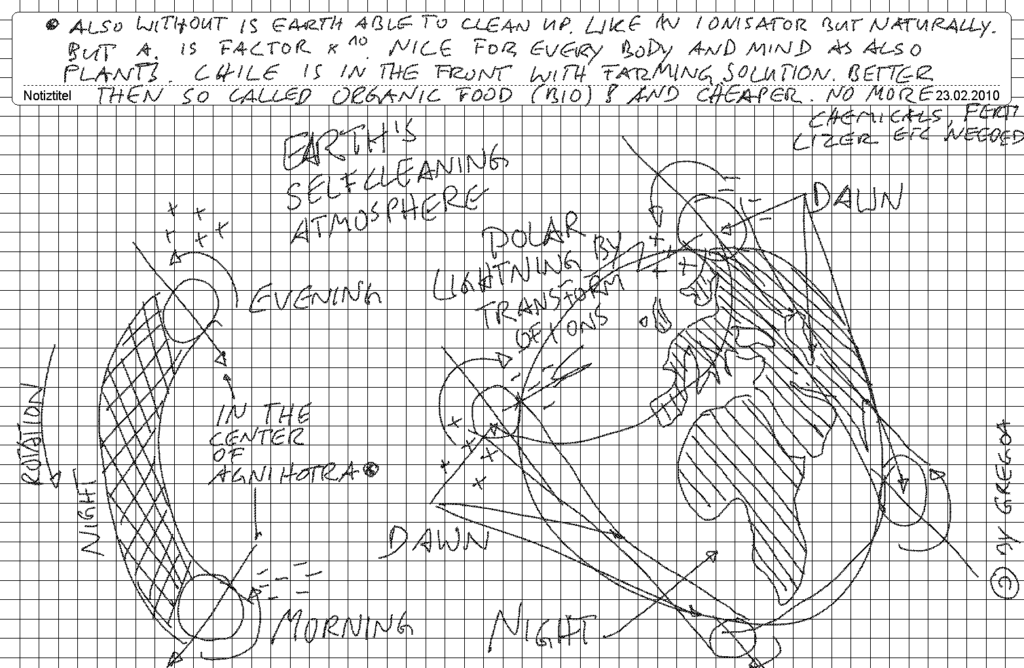 Further follows my theory of the self-renewal processes of planets which have an atmosphere and how Agnihotra interacts with it.

My reason is only to share a vision I had once in a dream in 1991 as shown in the sketch.

It is all about the exchange (of polarisation?) of positive ions into negative ions.

This happens in most accuracy in the centre of the shapes which we call sunrise and sunset.

Theoretical conclusion: Negative ions are brought from the higher atmosphere to the ground while positive ions are picked up from it.
On the side which represents sunrise the flow of ions goes from North to South. On the other side where sunset happens the ions flows from South to North. This process changes with the seasons. In which order I have no idea by now.

While 24h on the way through the poles and rotation of the planet around itself the ions are transformed at the poles into negative load and transported as described onto the opposite of each shape.

Agnihotra has shown, when it is done correctly and in time (as shortly described above) measurement shows the rise of negative ions is growing (exponentially?).

This seems to me the most logical explanation for my theory of a naturally self-renewal of the habitat if no disturbing or incident happens from pollution wherever it comes from.

Vasant always said that a flood of energy occurs from the sun at sunrise and sunset which interacts with Agnihotra. He refers this to the ancient tradition of Vedic knowledge (in video from sec 25).
But I would assume this is a regular result of the combination of the process of my so called self-renewal in interaction with physics and chemical reactions that happens while the combustion, the crackling of the rice (ignition) and also releasing of atoms like from copper for example.

The moment of releasing this immense negative ions starts when the rice is given into the fire in the calculated moment. And it lasts not so long – approx 5 Minutes. Which have to be for sure tested scientifically again.

It should be a good reason to setup constant fire places for Agnihotra and Yajnya worldwide which are safe as also open to nature and for the people. The buildings in these places should mostly be free from metals, cables and all types of radiant frequencies. But it also works fine if this is not possible.

And it is better to calm the mind in the moment of practice. Calm means to try to have a quite mind, nor to give wishes and being only in presence while running this service. This happens almost automatic.

Because Agnihotra is an amplifier with high potential. It releases all what is given in, so this should also be known.

More refer is needed but this should be enough to get a universal overview of what we’re dealing with.

Insprired by @gretathunberg, @Fridays4future, @extinctsymbol and written in thoughts to @NCS_catalyst.

Thanks so much for the courage of Greata and the Fridays for Future Movement.
Also to deepl.com for its accurate online translation tool.
And so many others to be known.

Exact GPS coordinates are necessary and default for all given solutions.

All previous links are taken from https://www.homatherapie.de/ and there are much more articles available.

The Integrated Science of Yagna is a very interesting script compiled by Dr. Joshi Rajani R. in 2001. It should be the most important information about this modern Homa techniques available.

There are still many aspects that have to be scientifically tested as acknowledged as to be have proven again.

My request intended is not driven by what I call a superficial-vedas-guru-cult or back-to-nature-movement or whatever is aspected instead of necessities.

I am aware of what I have written here. Adjustments are still possible.

It is my effort to bring one of the most potent solutions forward as should needed today.

Do not underestimate the effect of Agnihotra on radioactivity. It seems incredible.

We need to come together.
In Peace
The environment depends on it.